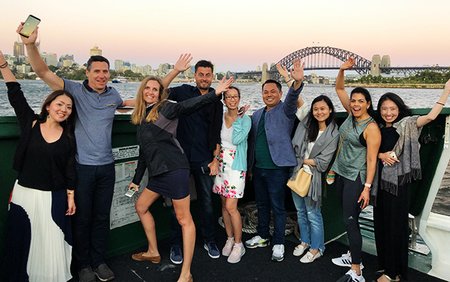 With such a wide variety of locations and schools, we felt that this would be a great opportunity to showcase our colleges to agents who are either sending students to Australia already and haven’t had the opportunity to visit the schools themselves, or have the potential to send students but have not yet done so, again, due to them not having personally visited our schools themselves.

A lot of planning went into every aspect of the 9-day trip, especially the activities, because although we have some wonderful wildlife, there are only so many ‘roos a visitor would like to see!

In response to the mail-out, around 300 agents replied and although we would have loved to have invited a lot more, the eight lucky agencies that were chosen were: CLASS Education (Mexico), IDP Education (Thailand), Travelmate Intercambio (Brazil), CI (Brazil), Ryugaku Information Centre (Japan), Wintech (Japan), Nextperience (Colombia) and JRIS Education (Taiwan).

The fam tour kicked off in Melbourne, Australia’s coffee and restaurant capital, on Thursday, 29 November with a great welcome dinner hosted by the teams from Impact and SACE.

Friday morning saw the agents start their trip in earnest, with a visit to Impact English College, meeting director, Fukari Sato and her team.  After a tour of the campus, the group tried their hand at making an Aussie favourite, a “Flat White”, and learning other coffee mysteries with Impact’s barista team!

Following this, the agents made their way to SACE’s Melbourne campus to meet up with the director, Lachlan, and his staff, stopping along the way to take in some of the city’s famous street art.  A highlight for the visitors was having morning tea with some of the current students, with everyone locked in busy conversation and the event going way over time!

The weekend saw our fam trip move north to the tropical city of Cairns, gateway to the Great Barrier Reef.  If our visitors thought that they were going to have a quiet,and sedate weekend, then Ueli, Carolina and the CCEB team had other ideas!

Saturday evening saw everyone experiencing a great dinner at the Tjapukai Aboriginal Cultural performance centre and no visit to north Queensland is complete without a trip to the reef!  Following on from this on the Sunday, CCEB organised an amazing excursion, which included snorkelling, diving and even a helicopter ride, with the day finishing back in Cairns with a visit to the Esplanade and finally dinner with the team.

On Monday, 3 December, the agents had a tour of the school and observed some great lessons and finally enjoyed a unch, served up by the college’s hospitality students.  Following an afternoon immigration workshop, the group took a 2-hr flight south to Brisbane, the “River City”, and Queensland’s sub-tropical capital.

On Tuesday, 4 December the day started with the agents meeting Anna France, director of Langports, before walking over to their Brisbane campus for an in-depth tour and presentation by the team. The group then moved on to Impact’s Brisbane college, which included the agents joining in a Singlish (Singing in English) lesson!

The afternoon was a joint excursion with the teams from Langports and Impact to Brisbane’s famous Lone Pine Koala Sanctuary, where the group experienced some of Australia’s unique wildlife, which included having their photos taken holding a koala and feeding the kangaroos.

Dinner with the Langports Brisbane team also included a ride on the Brisbane CityHopper Ferry to Southbank, taking in the city lights, with dinner overlooking the famous river.

The next day, our agents journeyed one hour south to the Gold Coast, Australia’s holiday playground and home to Inforum Education and Langports Gold Coast campus.  The bus was met by Inforum’s director, Simon, making a quick trip to the famous beach for a few selfie moments and then back to the college for a tour, and a walk over to Inforum’s high-rise accommodation for some views over the GC’s 50-km of beaches.

The morning finished with a 10-minute tram trip to Surfers Paradise to be greeted by Anna and Julie from Langports.  They embarked on a visit to the 77th floor of Q1,  Australia’s tallest residential building for lunch and amazing views and then everyone moved to Langports for a tour and some classroom observations. It was a beautiful day so the crew went for a walk around Surfers Paradise and even dipped their toes in the ocean!

The day finished up with Simon and Jun greeting our guests at their hotel for a stretch-limousine ride in typical “GC” style, first to Main Beach and then for dinner with the Inforum team, overlooking the Southport Broadwater.

Thursday dawned bright and sunny, perfect weather for the one-hour bus trip south to the surfing mecca of Byron Bay.  Here, the agents were greeted by Michael O’Grady, the director of Byron Bay English Language School.  Michael showed the group through the school, stopping for friendly, informative chats with staff and students alike, typical of Byron’s laid-back lifestyle.

Michael then took everyone to the most famous of landmarks, the Byron Bay lighthouse, marking Australia’s most easterly point, for some incredible views. This was followed by a look through one of the student houses before travelling back to town for lunch and a bit of shopping.

Following this, it was goodbye to Byron and “G’day” to Sydney!

Friday, 7th December was the last official day of the trip, which commenced with a visit to Langports Sydney campus, where Anna was on hand to showed our visitors through the college for some great observations of classes and meetings with staff.

Although we were coming to the end of the trip, there was one more very important stop and that was at Sydney English Academy, located in Sydney’s iconic beach-side suburb of Manly.  Here the group was met by the director, Mick Edwards, and his team.  Everyone took in the sights of this famous area, (including its beautiful beach) and a tour of the school, and what Aussie experience could be better than a BBQ lunch by the water?!

The group then caught the famous Manly ferry back to the city, passing such iconic landmarks as the Opera House and the Harbour Bridge, with the last event of the trip being a memorable dinner with the SEA team in Darling Harbour.

We all agreed that by the end of the trip, these agents had experienced a side of Australia, our culture and of course our colleges, that they would otherwise have never had the opportunity.  New friendships had been made, hopefully forming the basis of successful business partnerships for years to come.

IALC is delighted that our first IALC Australia Fam Tour was a great success and we would like to thank all of our members in Australia and the agents who took part.