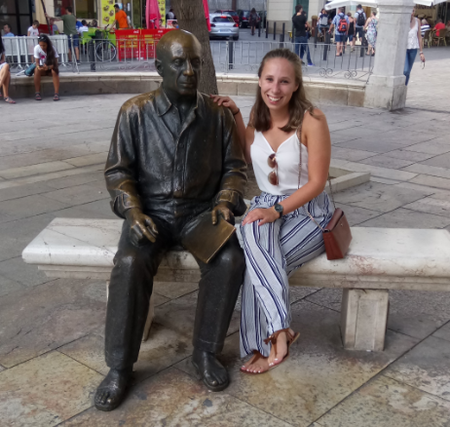 IALC-accredited Spanish language school Malaca Instituto brings you the story of Celine Prevos, a Spanish and internship student who has been inspired with a love for learning languages.

As long as I can remember, I am interested in other cultures and other languages. When I was younger, my family and I would go on holidays to Austria every year. In the mornings we always would go to the bakery to get fresh bread so my parents taught me to say ‘zehn brötchen bitte’. I still remember how proud I was walking out the bakery with the bag of brötchen in my hand. I think that’s where my love of learning languages began. Later on, I learnt more languages and every time I was able to have a conversation with someone from another country, even if it was just a very small conversation, I would feel as proud as that little girl walking out of the bakery.

I am very passionate about learning languages, which is the main reason why I decided to study ‘International Business and Languages’ with English, French and Spanish. So when I heard I had to do an internship, I was pretty sure I wasn’t going to stay in the Netherlands to do this. First I wanted to go to France. In 2015 I lived in Paris for half a year and I wanted to go back to France to further improve my French. But after sending more than 20 application letters without any response I figured that this wasn’t going to work out. So when Lisa from Malaca Instituto came to our school to tell us about the ‘Spanish & Internship programme’ they offered, I was immediately very enthusiastic.

So on the 30th of July of this year, I got on a plane with three study friends to live for 20 weeks in Málaga in the South of Spain. In the first eight weeks we followed language courses at Malaca Instituto and our Spanish level improved incredibly. We had had some Spanish courses at our University in the Netherlands but back then I wouldn’t be able to have a conversation in Spanish. Now, after only a few weeks, we would go to the city centre and ask for directions, order drinks or food, all in Spanish! Every week we studied a module and after 8 weeks I had progressed from level A1.3 to B1.4! This is all thanks to the fantastic teachers. I really can’t praise them enough. They are all wonderful people and make the lessons so much fun. They see immediately when you don’t understand something and go to the edge so you will. The thing that surprised me the most was that they knew everybody’s name after only one day! I immediately felt at home.

After 8 weeks, we started our internships but I didn’t hear anything fom the company I was supposed to go work in. Malaca Instituto then decided that I could do my internship with them. Half of the time I work at the marketing department and the other half of the time I help the activities team. I think I couldn’t be luckier. I am learning a lot from my internship but I am also able to really contribute. Instead of serving coffee or making copies all day like most interns do, I may write the content for a language learning platform or search for prospects on markets my colleagues of the marketing department are going to visit. Furthermore, get great guidance but am also free to carry out tasks the way I feel is right or to bring my own ideas into practice. And all my colleagues are such lovely people who are always happy to help and really appreciate the things I do. That means the world to me.

Thanks to my work at the activities department, I’ve seen a lot of Málaga and Andalucía already. I think I’ve almost seen all the museums in Málaga, the beautiful ‘Manquita’ cathedral and the Alcazaba. I attended a concert of the Philharmonic orchestra of Málaga in the beautiful Teatro Cervantes and visited surrounding cities like Sevilla, Córdoba, Mijas and Marbella. The best thing happened a few weeks ago when one of the students on the tour asked if I was Spanish. Couldn’t be more proud!

I fell in love with Málaga and Spain, its people and traditions but most of all with its language. Spanish is such a beautiful language and I am so grateful I can add it to the list of languages I speak. I never thought I would be able learn a language this fast but now I am even more passionate to become more fluent and learn more languages! I remember one day in the second week I was in Málaga.

I visited the city centre and I was able to communicate with each and every person I met. I bought my entry ticket in Spanish, a asked a French guy to take a picture of me with the beautiful view in French, I answered somebody else’s question in English and said thanks to a German girl for letting me pass in German. At that exact moment I realised how gifted I was to speak all those foreign languages… and I owe it all to ten little bread rolls!