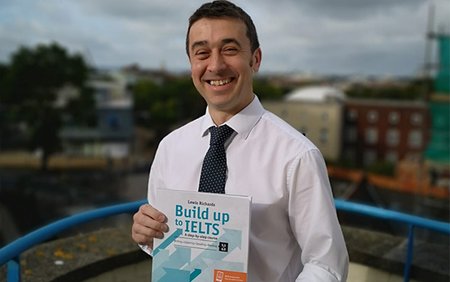 IALC accredited language school, LSI Porstmouth is excited to announce that their Director of Studies has published a new book that will help students pass their IELTS exam.

Lewis Richards has been teaching IELTS for nearly 20 years, the last 16 at LSI Portsmouth where he is Director of Studies and Teacher Trainer.  We had a little chat with him about his new book, Build Up to IELTS:

Q: What gave you the idea to write this book, Lewis?

So I wrote my first IELTS book, ‘IELTS Advantage Writing Skills’ in 2011, and the main principle behind it was to try to teach the writing step-by-step, as you would do in a class. Along with my co-author, Richard Brown, we set out to write a book that helped students to get a high score in the writing by turning how we would teach our IELTS classes into a book form. The book was really successful, and is still selling well now. That book was aimed at getting 6.5-7.0 in writing.

In the last few years, I found myself teaching a lot of lower-level IELTS classes, and it seemed that students were starting IELTS courses earlier and earlier, and from a lower starting point. So I spent quite a few years using different published materials at IELTS 4.5-6.0, but I felt there wasn’t anything that mirrored the step-by-step approach of IELTS Advantage. So, I had the idea, along with two colleagues at LSI initially, to see if I could put a coursebook together at a lower level of IELTS that took students step-by-step from around 4.5 up to 5.5 or 6.0. It was quite a challenge to write material at this level for all four parts of the IELTS exam, and it took a couple of years to write, but I’m happy with the finished product.

Q:  So what’s different about this book compared to other IELTS course books?

So, firstly, as I mentioned, it takes students step-by-step through the different parts of the exam, building up their knowledge and skills as it goes along.  With reading, for example, each unit has what I’ve called ‘Skills focus’, where students can learn different reading techniques on short texts, followed by ‘Skills application’, where they apply those skills to full-length texts. This is exactly how I do it in class, and I’ve found it works – to work on the skills and techniques first, and then apply them to longer texts. As well as that I wanted to include a wider range of topics than traditional IELTS course books, because I wanted to challenge students and keep them interested, and also to expose them to texts about real-life issues, as well as the more traditional topics like crime and health.  So, for instance, the book includes texts on topics like veganism, the Universal Basic Income, alternatives to tests for school children (ironically!), the problem of single-use plastic, well-being classes in schools, how to best share wealth in society, and so on. I would also say that sometimes you can use a course book and you suspect that some of the material hasn’t been tried and tested in class, but everything in Build up to IELTS is the product of trial and error in the classroom, which makes me confident that it works.

Q: What do you enjoy about teaching exams?

I think like any exam teacher, it’s of course great when your students pass with the grade they want, because it not only enables them to move to the next stage of life, like going to university in the UK, for example, but it is also a great sense of achievement for them, and for me as a teacher. I also like the feeling of ‘we’re all in it together’ that you get in exam classes, where everyone, the teacher included, is working towards the same goal, and everyone wants everybody else to be successful.

Q: What are the biggest challenges for students taking IELTS?

That’s a big question!  I think IELTS is tough exam in many ways, because it is not graded for level – in other words you might be aiming for 5.0 or 8.0 and you take the same exam. In other exam pathways, like the Cambridge exams, you take whichever exam fits your level. So that brings a lot of challenges for students who are at levels 4.5-6.0, because they have to tackle an exam which is also designed for people aiming at much higher grades. So that goes back to what I was saying earlier about reading – something that is really important is to have material for lower levels which teaches skills and techniques without overwhelming the students with texts and listenings that are too difficult, but at the same time, you can’t use material which is too easy, because it doesn’t reflect the real exam. I also think students need to learn grammar in a functional way – I mean that they need to be able to use particular grammar structures in particular ways, both in writing and speaking, and this isn’t the way normal General English coursebooks do it. So, for instance, in the book, there’s an exercise on using the second conditional to talk about possible solutions in problem/solution essays, and this kind of approach is important.

Q: How is it different from the Cambridge exams?

I think there are two main differences – one, as I’ve said, is that the Cambridge exams are divided by level, so if you are a B2-level student, you can take FCE, if you’re C1, CAE, and so on. And also, there’s a specific grammar and vocabulary paper in the Cambridge exams, the Use of English, which there isn’t in IELTS. In IELTS the grammar and vocabulary are of course tested, but through speaking and writing, so that’s quite a big difference.  And of course, IELTS is more academic, it’s generally for people who want to study in an English-speaking university environment, so the tasks are often more academic – task 1 writing, for example, where you have to describe data in graphs and charts.

So, I’ve been asked to write a second level coursebook in the series, so this time a full course book which aims at around 7.5, so that’s my next project. I’m currently working on the material, and trialling things in class, in preparation for putting it all together into the next book.

Get your copy of Build Up to IELTS here!