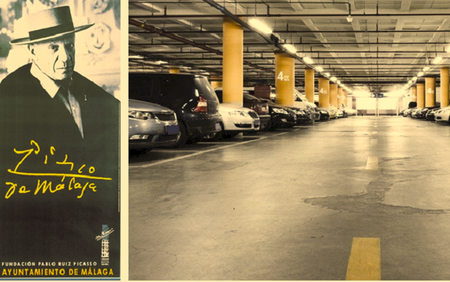 Or “The 3 “Ps” of Malaga’s success:  “Parkings”, Picasso and Pedregalejo”

What do Picasso and underground car parks have in common? Read on and you’ll find out.

There’s no denying that something positive is going on in Malaga. The EuroBarometer say it’s the best place to live in Spain, top travel sites, newspapers and blogs keep citing it and when you are here to experience it yourself you find a fascinating mix of old (ancient) and modern, high culture and beach lifestyle and a fantastic café and gastronomic scene. So how did this happen?

It all started back in the last century (towards the end to be precise) when Christine Picasso mounted several exhibitions in collaboration with the town hall which culminated in the opening of a permanent Picasso museum in 2003.

Before this, Malaga had been more famous as the airport for the Costa del Sol tourist resorts rather than as a place where you would actually want to spend some quality time. In order to establish a more equitable division of the rewards of international tourism, the Town Hall of Malaga decided to reinvent Malaga as a cultural hotspot, and City of Museums.

Malaga, as one of Europe’s oldest cities, had a very interesting architectural heritage dating from Phoenician/Roman times, but rather more so from the Muslim period. Unfortunately, many of these buildings were in a state of disrepair, hidden away behind dilapidated walls and Malaga’s horrendous and polluting traffic problem. Most Malagueños weren’t even really aware that they existed.

The question was how to create an urban setting which would enable the renovation of Malaga’s monumental architecture and the use of some of its outstanding features as homes for the museums of the “city of culture” tourism plan. The answer was to get rid of the traffic. This was achieved through the building of some 25 underground car parks and the pedestrianisation of the majority of the extensive historic centre.

Getting rid of the cars not only allowed for the opening up and renovation of many “palacetes” but it also created a substantially less polluted city centre ideal for wandering around and eating and drinking on the many pavement terraces of the tapas bars and restaurants which replaced the motor car. Malagueños took back possession of their streets and regained their love for “paseos” (strolling) and “tapeando” (tapas crawls).

Some 15 years after the opening of the Picasso Museum, the Malagueños, discovered they were now living in a city with over 30 museums, wide boulevards and winding historic streets all with beautifully restored facades and dozens of tempting places to eat and drink at street level as you watch the world go by, and hardly a car in sight.

Even though this is Spain’s 6th biggest city, the delights of the historic centre are all within easy walking distance and this concept even includes the (relatively) new yacht marina and people watching paradise that is Muelle Uno.

It would be totally unfair to talk of Malaga’s undeniable success in attracting cultural tourism without mention of the Pedregalejo beach-front area on the eastern side of the city. Another car-free success story, this area still has the charms and authenticity of the original fishing village. You can walk, skate, jog, cycle for around 45 minutes (less if cycling) from end to end, while others watch you go by as they enjoy the Malagueños’ favourite pastime of eating and drinking amongst friends. This is everyone’s favourite area for eating “pescaito” (small fish) and “marisco” (seafood) or just meeting friends on the beach.

As The Lonely Planet Guide says, you can “stay in a creative boutique hotel sandwiched between a Roman amphitheatre, a Moorish fortress and the polychromatic Pompidou Centre, while you reflect on how eloquently Málaga has reinvented itself for the 21st century.”

So back to where we started, the answer to the question should now be fairly obvious – “Parkings” (car parks) and Picasso have both played an essential role in the development of Malaga as a cultural tourism hot spot and an ideal destination for students of all ages wanting to study Spanish!